Each person has energy centers along the spinal column called chakras. Chakra is translated as wheel, round circle, wind. The higher the chakra is the more frequent vibrations it has, the more subtle is the appropriate state of mind. Each chakra is not only correlated with certain physiological and psychological functions but it also characterized a spiritual level of a human being. The chakras are actually sort of gates for energy exchange between an individual conscience and the Universe.

The first chakra or the root chakra “muladhara” is located in the perineum and it is connected with issues of life supply. It is activated straight at the moment of birth. From this moment an evolution of a person starts. There is also a fire energy in a form of a shake which is called “kundalini” in this chakra. The chakras located higher become active when “kundalini” is going through them, which correlates with spiritual development of a person. The chakras correspond to the colours of a rainbow. There are also seven colours of a rainbow: red, orange, yellow, green, blue, indigo and violet. The aura of a human being has the same colours, same structure. 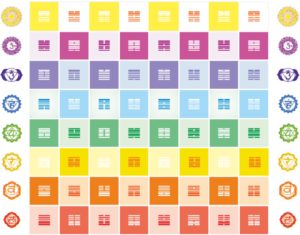 The first line (from 1 to 8) of the playing board – muladhara chakra is red. Its dominant is survival, life power. It is responsible for our animal instincts. Full activation of this chakra brings into life the ability to fly or levitation.

The second line (from 9 to 16) is svadhistana. It is located a little bit higher, it has orange colour. Its dominant is pleasure, sexuality and creativity. This chakra is connected with selfishness, our own “self”.

The third line (from 17 till 24) is “manipura” chakra. It is locate at the solar plexis. It is of yellow colour. Its dominant is feelings, will, control. At the level of manipura the conscience is still restricted with such down to earth levels as sensuality, ambitions.

The fourth line ( from 25 to 32) is anahata chakra. It is located at the heart centre, it is of green colour. Its dominant is love, compassion. Love actually rules the heart. When the chakra is activated, our desires begin to fulfill.

The fifth line ( from 33 till 40 ) is vishudha chakra. It is located in the throat centre. It is blue. Its dominant is creativity. Vishudha is connected with ears and throat. It impels us for self-expression.

The sixth line (from 41 till 48) is adzhna chakra and it is located at the third eye centre. It is indigo. Adzhna is actually the third eye that can perceive the subtle world. Adzhna is known as “the gate to release”. The full activation of this chakra means concentration of thoughts at the subtle world, the Highest self, that brings towards junction with the Highest and release from a number of future lives.

The seventh line (from 49 till 56) is sahasrara chakra. It is located on the top of a head. It is of violet colour. Its dominant is spirituality and concentration at the Highest. The full activation of this chakra leads to bliss, realization, it is also connected with unusual skills. This chakra is located at the top of a body and its activation corresponds to the Highest stage of a human evolution.

The eighth line (from 51 till 64) is samadhi chakra. It is located overhead. It is of transcendental colour and it is associated with the transcendental sound. Its relating to a spiritual or nonphysical realm.